United We Stand, Divided We Fall

Yesterday, the country was stunned by the violent attack on members of the US House of Representatives who were practicing for this week’s charity baseball game, a tradition dating back to the early 1900’s. It brought Washington up short, and there was more discussion of unity and family then we have heard in a long time.

Speaker Paul Ryan took to the House floor to remind us that we are “one family”, and President Trump noted that “everyone who serves in our nation’s capital is here because, above all, they love our country.” Congressman Joe Barton (R-TX) put it best when he noted that “We have an R or a D by our name, but our title is United States representative.”

The Media’s Role in Shaping Democracy: Is It Helping or Hurting?

The media has long been portrayed as two sides of the same coin – on one side a watchdog to check government powers, and on the other a vehicle for propaganda.

In an era where fake news has proliferated online and the lines are blurred between social media rumor and breaking news, clarifying the news media’s role in shaping democracy can be tricky. To get perspective on the topic, icitizen conducted a poll of 2,505 U.S. adults on their feedback.

Do they think the media is helping or hurting democracy?

After all – civility in American politics has been an increasingly large concern. As pundits and politicians often set the tone for civic discourse, it can be hard to tell whether they provide a service or disservice in the eyes of the public.

“Open your mind. Open your world.” That was the ending line of the now famous Heineken commercial. In it, people from opposite ends of a variety of issues, had come together, built a bar and, at the end of it, had to decide if they wanted to sit down, have a beer and talk to each other. The twist? They didn’t know the person they were working with was “their enemy.” Yes, enemy is a strong word. However, nowadays, more so in the past couple of years, differences of opinions has converted friends, family, co-workers into ‘others.' That’s why Heineken's commercial hit a nerve.

Last month, Bridge Alliance held a Bridge Summit adjunct to Earth Day Texas in Dallas. The Summit was to be a physical unifying of our member organizations and a weekend to find new ways of working together aligned with our mission of revitalizing democratic practice and discourse in this nation.

The Summit was held in an exquisitely remodeled hospital with such an expansive Early American art collection I think even the Smithsonian might blush. In my final walk through of the venue and it’s grounds with eyes wide I felt a new sense of connection to our complex roots. Surrounded by these settings I understood that what Bridge Alliance and its member organizations are working towards is something that will have a weight on American history. This was felt by our attendees of the Summit and elevated our conversations.

The weekend was spent networking with organizations that we may have never met otherwise in person. The deep appreciation and curiosity in one another’s work was a spark in relationships that could take any form. Each of Bridge Alliance’s areas of focus were represented in organization attendance and workshops: civic engagement, governance and policy making, and campaign and finance reform.

We find ourselves in a political moment where significant sectors of the country warn of existential threats to our democracy. This began before the 2016 election, but it has since reached a fever pitch. Signals such as the Economist Intelligence Unit’s recent “downgrade” of the US from a “full democracy” to a “flawed democracy” have added fuel to the fire. At Healthy Democracy, we do not take a position about whether these threats are real or not, though we spend a great deal of time trying to improve our democracy.

As a nonpartisan organization, we cannot take a position that would turn off members of any political or demographic group. This is because we rely on our reputation as unbiased process experts when working with citizens from across the political spectrum. Additionally, we don’t take positions on issues that might come before a Citizens Initiative Review panel, including the proposals of our peers in the elections reform space.

In some ways, this makes it easy for us to choose the issues on which we take a public position (pretty much nothing), but when “threats to our democracy” come up, and considering our name is Healthy Democracy, what do we do? Do we retweet a statement praising a free press? Or is publicly expressing support for a free press now viewed as a partisan act? We can make these decisions ad hoc, but we risk inconsistency, or worse: letting our personal perspectives and biases sway our decisions. We realized that Healthy Democracy needed to do some thinking. Some nonpartisan hygiene, if you will, to get our internal activities and the external communication of our work squarely in our nonpartisan ethos.

As a result of our analysis, we humbly share some “nonpartisan hygiene” tips that may come in handy to other organizations in this space, including bipartisan political organizations, nonpartisan think tanks, newsrooms, and professional organizations. Government scientists and policy thinkers may find this helpful, as well. This is written with nonpartisan nonprofits in mind, but please take from it anything that is helpful to your organization’s needs.

Read this blog in full here

Don't Know Much About Civics: 93% of U.S. Adults Believe Civics Education Should be Bolstered in Public Schools

According to a new icitizen survey released by Sen. Chuck Riley (OR-15), more than nine in 10 Americans believe that more emphasis should be placed on civics education in public schools.

“We’re living in a time now where it’s hard to tell the difference between fake news and real news, and alternative facts are being presented as truth,” said Oregon Sen. Chuck Riley. “It’s clear constituents want to address this issue head on, and as an elected official, I’m obligated to do what I can to help future generations be prepared and informed citizens.”

The poll of 1,245 U.S. adults showed fully 84% of respondents support requiring high school students to pass a proficiency test in civics in order to earn their diploma (10% oppose, 6% unsure). This crosses age, gender, and party lines, and actually increases with age: support is at 74% among millennials and reaching upwards of 95% support among seniors ages 65 and older.

Taking the requirement further, almost a three-fourths (74%) of Americans support requiring high school students to take and pass the U.S. citizenship test to demonstrate civic proficiency (21% oppose, 5% unsure). The strongest opponent of this requirement are racial minorities; about a third expressed their disapproval (34%).

Any Successful Government Must Consider Not Only What Citizens Want, but What They Can Contribute

In the 20th century, the legitimacy of governments was based almost solely on the rule of law and the right to vote.

In the democratic upheaval of the 21st century, citizens still want the protection of laws and the ability to choose representatives, but those powers may no longer be enough to make government legitimate in the eyes of the people. In the future, governments may rise or fall depending on whether they give citizens meaningful roles in decision-making, problem-solving, and community-building.

Changes in democracy are occurring now because of tectonic shifts in the relationship between citizens and government. As a population, we are better educated than ever before. We are not as deferential to expertise and authority as we once were. And we are networked through the internet to an almost infinite number of potential connections and sources of information. In other words, the people have more capacity. The question of whether governments, civil society, and other institutions can develop the ability to unleash that capacity underlies most of the public problems we face.

This new reality of rising citizen capacity makes some public servants uncomfortable. Trapped in systems designed to protect their expertise, besieged by people who no longer believe their data or respect their authority, and faced with hostile constituents at public events, public officials are understandably skeptical about the virtues, capabilities, and good sense of their fellow men and women. 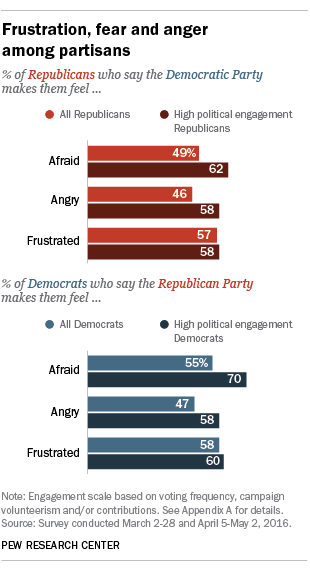 In our mission to "rebuild the middle ground" of United States politics, we are obviously fighting a losing battle. Pew lays out a pretty horrid landscape--and that was before the election. The left and right hate hate hate each other, and they may be caught in a downward spiral of distrust that tears the country apart.

If there's any hope to be had from this particular strategy, the middle ground needs to identify who's in it, and find each other--and fast.

The whole hypothesis of Wedged is that the cycle of mistrust is built on fairly reasonable people from each side buying into the idea that everyone on the other side of the political spectrum is a nutjob--where the nutjobs in fact represent a loud-but-small minority.

Posted by Debilyn Molineaux on January 23, 2017

I like to describe our country as “the big, raucous American family.” And there is hardly a better opportunity to build family connections than with games. Or a more revealing way to understand each other and ourselves, than by the tactics we use within the game.

My dad used to slip Monopoly money to my sister, because he couldn’t stand to see anyone ‘lose’. Our neighbor was outraged that my dad wouldn’t follow the rules of the game. Another card game we played with friends, ‘Nertz’ has a shared playing field and a private one... I was outraged when one of our friends refused to play in the shared field because it would benefit our team. He was in it to win...no holds barred. As you may imagine, I am accustomed to more coopetition than winner-take-all. (Thanks, Dad!) I learned much about people from playing games with them...and also tapped into my own hyper-competitive side on occasion.

The Bridge Alliance recently announced a $300,000 grant program to Bridge Alliance members who best qualify for investment funds based on the strength of their collaborative programs.  A fundamental tenet that drives the Bridge Alliance strategy is the conviction that for significant political transformation to occur, a network must be established to build a shared identity, raise visibility, strengthen and expand the numbers of organizations and individuals dedicated to collaborative civic problem solving and collaborative public policy innovation. The funding of collective impact programs will drive this process.

Invest America has just launched it’s first national fund focused on bipartisan and nonpartisan policy reform and transformation.  The fund provides seed financing and grants to the emerging community of political entrepreneurs whose core mission is to solve our toughest national problems.