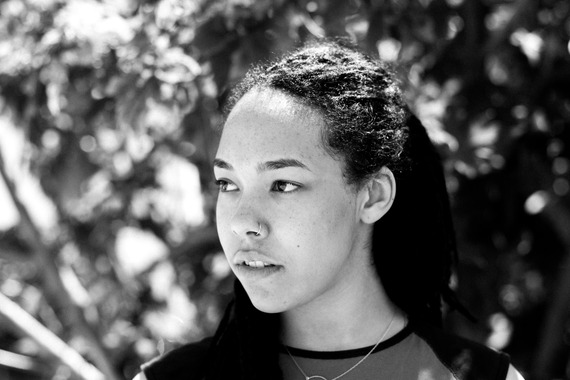 Where to start with a task like this! Being fresh out of high school, I can tell you all about World War 2, The Great Gatsby, or where to go to get the best off-campus lunch and make it back in time for 4th period. However, ask me about the major modern day political leaders, and I can give you presidential candidates from the two major parties and that's about it! I now have a huge responsibility to inform myself on issues and do what I can to make change happen. But how are any of us budding adults going to speak for our generation when we have so little understanding of recent and current events?

When I shared my concerns about voting my mentor, Joan suggested that I co-host a living room conversation about youth voting with my peers. "Living Room Conversations" are structured so that people with different viewpoints can have caring thoughtful conversations. The goal is to make space for new connections and deep listening.

The conversation took place in my small apartment flat in South Berkeley. I hosted with my brother, a 20-year-old non-voter who claims to not care about politics in the slightest. We each invited two close friends, creating a casual atmosphere in the house. We ate pizza, we talked about our friends, our schools and viral youtube videos. Then, we moved into the living room and switched our focus to the role we have in changing the political realities of our nation. Suddenly, I saw my closest friends in a whole new light.

In the first couple rounds of our Living Room Conversation we discussed what we all had in common; we were all students who shared fears of debt, time and failure. We shared the stress of preparing for what feels like an incredibly distant future. We all struggled with the need to narrow our focus and dedicate our life to one venture. I believe from that point on we felt a bond as a group; I definitely felt closer to my brother's friends after hearing that they too felt a crazy amount of pressure just to live comfortably.

The next round of the conversation shifted to voting, a topic which we soon realized we were split on within the group. Apparently a dismal voting turnout is common among our peers, a report released by the California Civic Engagement Project (CCEP) at UC Davis finds a mere 8.2 percent of eligible California youth, those aged 18-24, bothered to cast a ballot in the 2014 November election. That means more than 90 percent of young voters sat out the election! We shared if we were registered to vote and why or why not. I, as a registered voter and someone who worries a lot about the state of the country, was prepared to argue against those who I thought would bring the "I just don't care" response to the table. However, this was not the answer I received. Those who didn't vote expressed my same worry about the state of the country -- they just expressed it in different ways. The lack of power we all felt inspired some of us to vote in hopes of making small change, and caused others to feel apathetic and truly beaten down by the system. It was a real shock to find the common denominator was concern for the country despite our differences over voting. Furthermore, we all agreed that learning more about modern day politics and how to register to vote could have been more emphasized in high school.

After the conversation was over, I felt like we were on a high of togetherness. The conversation environment was incredibly validating and empowering; afterwards the non-voters even said that they were going to register to vote! In my mind, this was the ultimate desired outcome, and I was very content with the whole experience.

One week later, I checked back in with the boys, asking them if they wanted any help getting registered. Their response surprised me. They were over it. The high of the conversation was long gone, and they reverted back into their cynical and apathetic beliefs. I just didn't get it! I felt that we had really gotten somewhere. After reflecting on what felt to me like a huge loss, I determined that this inability to stay passionate about something seems inherent in our generation. I believe that we are all diverted by pop-ups, texts, statuses, all these streaming news feeds distracting us from following through on anything!

Whether this conversation or the next, I do believe the key to fixing this kind of problem is keeping the conversation going! Spreading the word and encouraging each other to see things through. On this issue, Joan and I discussed the idea of a support group for youth voters in which information is simplified and updated in hopes of making us all more knowledgeable to the point where we trust ourselves with voting. It is crucial that we pool our best ideas and keep learning from each other as we seek to become a generation apt and able to be the change we want to see in the world.

Serena Witherspoon is currently a student at Berkeley City College. She majors in Sociology and is especially interested in critical sociology and the social-conflict theory. She is currently interning with Living Room Conversation's in hopes of raising awareness about youth voting and learning about politics. Her other passions include music, dance and visual art.