Voters and Vice Presidents: How the University of Delaware Made It Count with TurboVote

By Democracy Works. Reposted from Democracy.Works

Disclaimer: The Bridge Alliance Education Fund DOES NOT endorse former Vice President Joe Biden's presidential campaign or any other politician's campaign. The purpose of this article is to highlight the work of Bridge Alliance member Democracy Works and its partnership with the University of Delaware.

On a Tuesday in late September of 2018, hundreds of students crowded into the University of Delaware’s (UD) student union. Some of them may have just been there to grab a quick bite, but others had heard through social media about a special event in honor of National Voter Registration Day (NVRD). Either way, they were in for a treat, and not just from the student union’s snack counter.

Around 11 a.m., the guest of honor arrived: UD alumnus and former Vice President, Joe Biden. After being greeted with enthusiastic applause and a quick round of selfies, he addressed the crowd about the importance of democratic participation, regardless of political orientation.

In addition to the Vice President, some other important people were in attendance that day: leaders and volunteers from the University of Delaware’s Biden Institute. Armed with laptops, stickers, signs, and plenty of civic spirit, they harnessed the excitement of the event to sign students up for TurboVote.

While the Vice President’s NVRD visit was certainly a highlight, it was far from the only way that UD’s TurboVote implementers at the Biden Institute promoted civic engagement on campus. By the end of 2018, UD signed up more than 2,500 students for TurboVote. The effort took a lot of work; this article outlines how they did it. 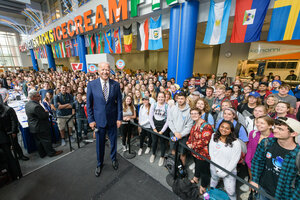 The Biden Institute Makes It Count

Though UD also had a brief partnership with TurboVote between 2014 and 2015, efforts to promote the tool took hold in 2017. Two factors contributed to their success: First, the Biden Institute was founded that year, creating a natural foundation for civic engagement efforts. Second, Catherine McLaughlin came on as the Institute’s Executive Director. She previously served in the same role at the Harvard Institute of Politics and helped make that organization one of TurboVote’s first partners. She was instrumental in bringing the tool back to UD. “My love for TurboVote goes wherever I go,” McLaughlin remarked.

From the very beginning, students served an important role at the Biden Institute and with TurboVote implementation, primarily through Make It Count: a student-led group focused on campus civic engagement.

In order to charge full-steam ahead with promotion, however, McLaughlin explained that implementers needed “leadership from the top” to support their efforts. She noted that getting university buy-in is “probably one of the biggest challenges on any campus.” In addition to needing university approval to pursue many of their strategies, implementers also needed active university support in order to do things like place TurboVote pop-ups in “MyUD”, UD’s administrative portal for students.

The key for the UD organizers lay in building a foundation and working their way up the chain of command, rather than going to the top-brass right away. This involved having a lot of conversations, but it meant that by the time implementers sat down with Dr. Dennis Assanis, the university president, they had much more credibility. Like students preparing for a test, they had done their homework and had the right answers on hand. “Was the registrar on board?” (Yes.) “Did they have support from faculty members?” (Of course, and here is a list.)

The fact that McLaughlin herself was a university administrator certainly helped matters, but she noted that student involvement was just as important.  She made sure to have students in the room with her every step of the way. In fact, sometimes students were even more persuasive than faculty or staff. When seeking approval to turn on the Voter Engagement Extension through their white-labeled Campus Labs Engage Student Life page, the hub for student groups on campus, it was more effective for the student leadership of some of those organizations to approach administration. After all, they were the ones the Student Life page was designed to serve. 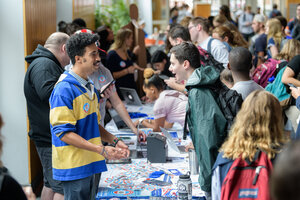 The keys to success: competitions and clicks

One of Make It Count’s most notable projects involved looping in another active, powerful stakeholder on campus: Greek life. Around 30 percent of the UD student body are members of fraternities or sororities, and they tend to be a particularly-involved segment of the university community. In addition, during April, groups compete to raise money for charity as part of Greek Week. “Make It Count” saw an opportunity in all of this and decided that adding a voter engagement component to Greek Week could be hugely successful. They were right.

Using unique referral links to track signups from each Greek life organization, Make It Count ran a competition to see which groups could generate the most. Over the course of just one week, the competition produced over 500 signups! Even after the midterm elections passed, Make It Count continued engaging voters during the spring semester by incorporating voting into this already-existing campus life event. 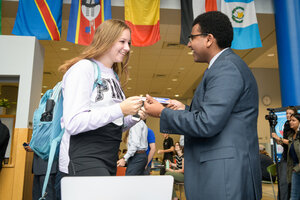 Social media also became a central part of how implementers promoted their efforts. In fact, one of the first things they did to publicize TurboVote was put out a video explaining how and why students should sign up. Social media promotion didn’t stop there. Naeem Jenkins-Nixon, the Biden Institute’s Communications Manager, noted that the hashtag #UDMakeItCount continues to make frequent appearances on the Institute’s social media posts to this day.

High-profile events and posts tapped into campus pride and generated a lot of buzz. Perry Spiegel, Events Manager at the Biden Institute and a recent UD grad himself, explained that they “really helped contribute to overall knowledge [of voter engagement efforts] on campus.”

The fact that 83% of UD students were already registered to vote (based on 2016 figures, 2018 NSLVE data showed a similar percentage of 83.9%) presented both opportunities and obstacles for TurboVote implementers. On one hand, it reflected a strong civic spirit which is always something to celebrate. But on the other, it theoretically lowered incentives to sign up for TurboVote, given that registration assistance is one of the tool’s primary selling points. This did not deter the team at the Biden Institute.

Naturally, they promoted the registration feature to help the remaining 17 percent of campus get registered. They also took care to highlight what TurboVote could do for folks who were already registered: facilitate absentee ballot requests and send reminders. Their efforts paid off. McLaughlin remarked that, “with 83 percent registered, the fact that we’re still getting [thousands of signups]...[is] a pretty strong indication that there’s an interest.” It helped that signing up for TurboVote is incredibly easy, something that students frequently commented on, according to the Biden Institute team.

As Vice President Biden told UD students in the video message, “Our democracy and all of [the] freedoms we hold so dear depend on your diligence, your engagement, and your vote.” This sentiment undergirded the hard work and dedication of faculty, staff, and students at the University of Delaware and helped propel them to make 15 appearances on the TurboVote Leaderboard, our biweekly ranking of campus partner signups, in 2018 alone.

Moving forward to 2020, blue hens continue to lead the way in their commitment to democracy. 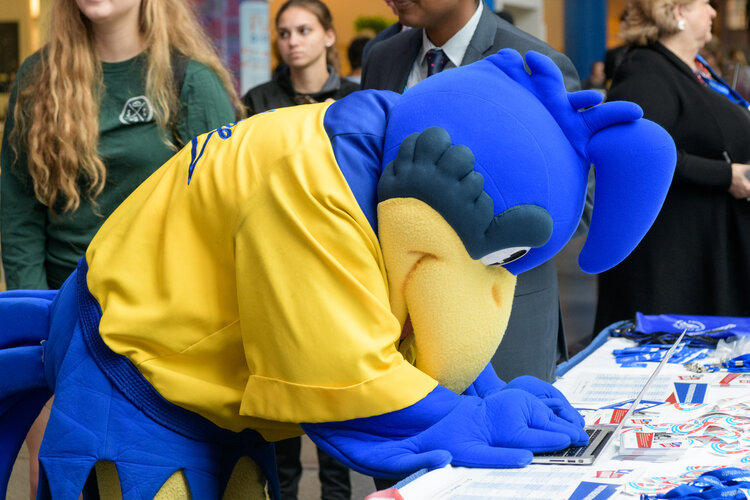