The last time we had a --mostly-- global agreement about how we would treat each other, how we trade between nations and an agreement to common human rights was following World War II.  We were wearied by war and sacrifice, by hunger and scarcity, by uncertainty and fear.  We wanted peace and prosperity.  So we drafted the agreements to form NATO, rebuilt Germany and Japan, created Israel and thought, “ah...this is it, the good life.” 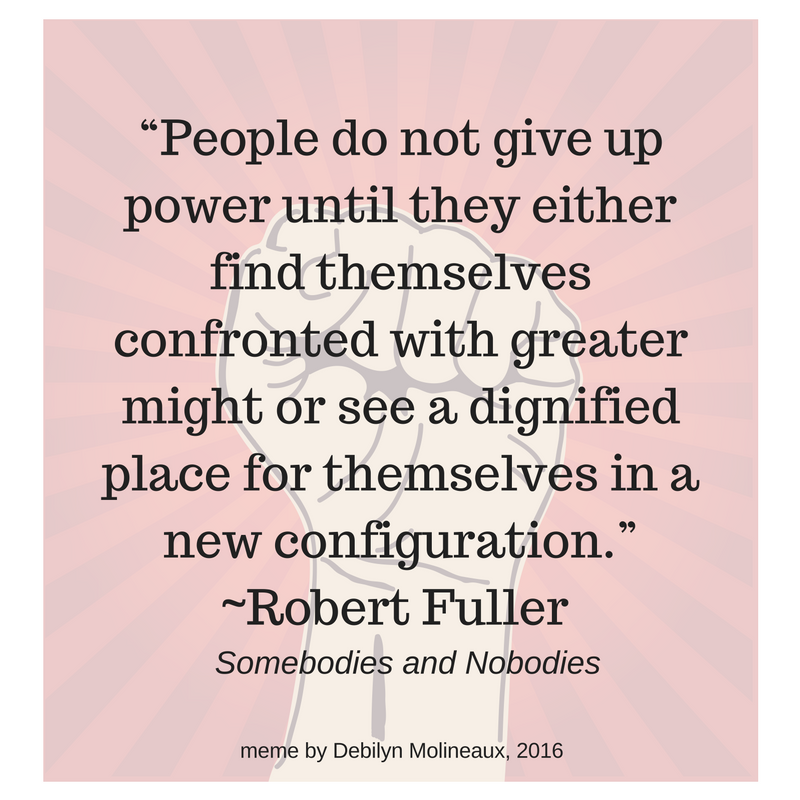 Only now, 70 years later, those agreements are insufficient. What was peacemaking at the time, became the foundation of our next set of societal issues.  From inequity in society to increasing conflict -war- in the Middle East, we again find ourselves at the precipice of chaos. Right on schedule.

A few years ago, I read a book called The Fourth Turning by William Strauss and Neil Howe. They outlined a general pattern, which is called a saeculum, in Anglo-American history that has existed for at least 500 years through 25 generations.  Within each saeculum are four turnings...each about 20 years or the  length of a human generation. The saeculum itself is roughly the length of a human life.  So every 80 or so years, we repeat the pattern, moving from the most social cohesion to the least and ending in a major -- or total-- war.

“People do not give up power until they either find themselves confronted with greater might or see a dignified place for themselves in a new configuration.” ~Robert Fuller, Somebodies and Nobodies

Evidently, suffering has been required for us to advance.  Can we make a peaceful transition this time?

Our last “first” turning was post WWII to 1963.  This “High” period is the most peaceful, largely in reaction to the horror of the recently concluded war. Society works well for most people.  And for those who want more, a counter culture develops to call out what doesn’t quite work.  The mid 50s saw Brown v. Board of Education and the transit strike in the south, as black Americans aspired to the have same prosperity they saw white Americans enjoying. Beyond equal opportunity, our fellow Americans were asking for humane treatment by society.  Resistance was fierce as long held beliefs about societal rank was challenged and people feared losing their own status.

As unrest grew, we entered our second turning, the “Awakening”, where we openly questioned societal norms and began experimenting with new communities, relationships between people and to the government.  This period increased our passions for change… or resistance to change. Violence became more prevalent with war protests and politically as the KKK and Black Panthers fought ideological wars.  Mainstream America watched and felt helpless to inject calm or order.  The world felt like it was unpredictable and the economy was uncertain, with oil shortages and a widespread belief that we were about to enter another depression,

With the “Reagan Revolution” in the landslide of 1984, the public mood shifted to domestic prosperity, a freeing of market restraints, lower taxes and a buildup of our military to keep us safe. As calm returned to most cities and the economy felt more stable, we entered into our third turning, the “Unraveling”.  Our viewpoint of the government shifted and distrust grew.  Two shifts in thinking occurred one after the other.The first was that government had grown too powerful and intrusive into our lives.  The second was that corporations were a wealth building tool that had no accountability beyond their shareholders.  As the stock market soared in the 90s and 00s, we felt wealthy. And then, like a house of cards, it collapsed.

We entered the fourth turning -- the “Crisis”, following the 2008 financial collapse with a lot of fear. We feel vulnerable in many ways. We fear financial ruin, we fear terrorism, we fear for our planet, we fear our government, we fear our police. The old systems put in place post WWII no longer work as intended, protect us as desired, or free us to live the American Dream.

And so we fight with each other, our allies, our enemies, thinking that if we can restore what was, we will again have peace and the good life. Only the cycle doesn’t work this way.  Over the last 500 years, we’ve progressed by granting more freedom, opportunity and power to each succeeding generation. While the past may feel safer, it is the future we must plan.

In Part II, we'll look at the predictable factions involved with social change. In Part III, we'll explore possibilities of our imminent change.

Debilyn Molineaux is a transformation partner. She works with visionaries and movements in support of a new national and global social contract focused on personal dignity and sovereignty. Her work highlights the relationships between individuals, institutions and governments for conscious transformation. She is the Managing Partner for Living Room Conversations, President of Coffee Party USA and Co-Director for Bridge Alliance, representing micro to macro system approaches.  She’s also an advisor to Allsides.com and Ingenuity Innovation Center.