The Politics of Friendship

This article was originally published on Forbes.com for Civic Nation's ALL IN Campus Democracy Challenge.

There’s something happening in our country. Partisan politics seem to divide us more than ever. We see divisive rhetoric and actions around issues like immigration, health care, taxes, and almost everything in between. This divide paralyzes our elected officials, keeping them from passing legislation at every level of government. It even prevents many of us from forming friendships or meaningful relationships with people that hold political perspectives different than our own. A polarized populace unable to reach across the aisle or even across the fence is not the America that we have been raised to believe in, or what I believe any of us really want.

The promise of America, of our democracy, has never been a guarantee. It requires something of each of us. If we want a government that represents us, we have to participate. And we have to work together, despite differences in perspectives or political ideology.

That’s the idea behind the coalition that I lead through my role at Young Invincibles. The Students Learn Students Vote Coalition is made up of nearly 300 nonpartisan organizations across the country working with colleges and universities to promote democratic engagement and to help make voter registration, education, and mobilization more accessible for students.

In order to achieve the democracy we want, we have to also embrace bipartisanship and encourage our elected leaders to stop worrying so much about partisanship and to start focusing more on the health, wealth, and safety of the American people.

The person who has taught me the most about the importance of bipartisanship is someone who comes from the opposite side of the political spectrum than where I sit: Republican Senator Bob Dole.

In 2005, as an undergraduate at the University of Kansas (KU), I was awarded a scholarship from the Robert J. Dole Institute of Politics. I had never been involved in politics before, but through the Dole Institute I was connected with the first campaign I ever worked on – which resulted in a junior Senator from Illinois being elected president. I certainly didn’t think that a connection through the Dole Institute would lead to every other professional opportunity I’ve had since. Nor did I realize the continued impact that this great Republican statesman from Kansas would have on my life. 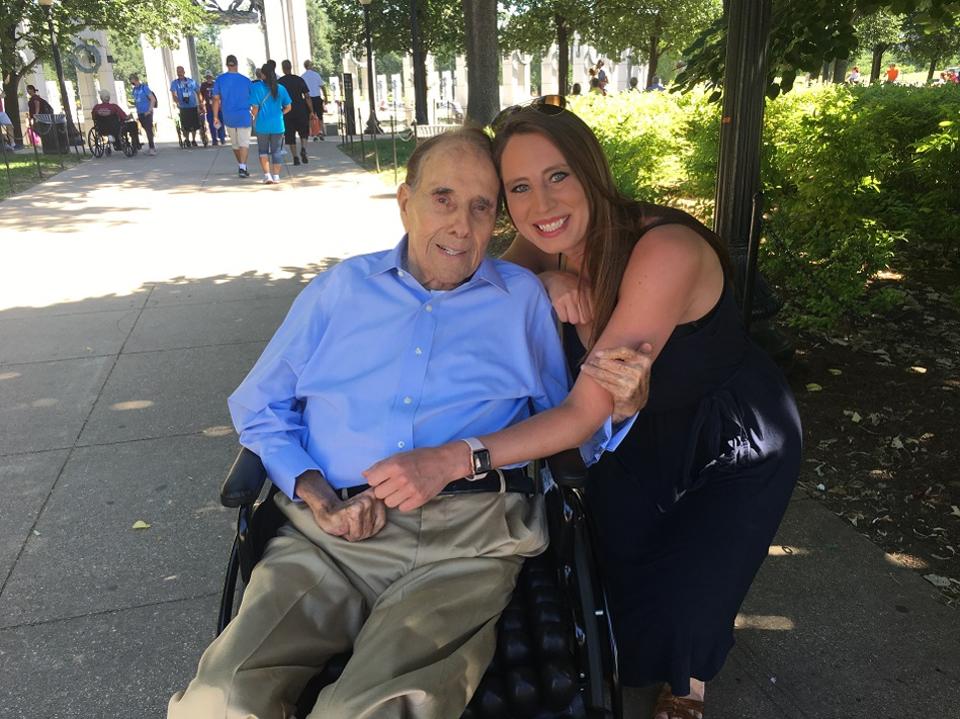 I returned to KU and the Dole Institute as a staff member from 2012 to 2015. During that time, I was given the once-in-a-lifetime opportunity to travel with Senator Dole as he visited all 105 counties in Kansas simply to thank people for all of the opportunities he was given in his life.

As we traveled together over the course of six months, Senator Dole and I developed what has now become one of my most treasured friendships. He loves to joke and introduce me to people as his “Democratic friend” – though I know I am far from his only friend with different political beliefs. Senator Dole was well known during his time in Congress for his many friendships across party lines. He was even awarded the World Food Prize with Senator George McGovern, a Democrat, in 2008 for their collaborative work to address childhood hunger globally. As the rhetoric in our country and on Capitol Hill deteriorates, I increasingly see our bipartisan friendship as less of a punchline and more as a perfect example of what we need in our country.

My friendship with Senator Dole has underscored for me that while our hometowns are less than two hours apart, we belong to two incredibly different generations. A product of the “Greatest Generation,” Senator Dole served and was wounded in World War II and continues to greet Honor Flight Veterans at the World War II Memorial the National Mall every week. As a product of the Millennial generation – the most diverse, most well-educated, and most debt-ridden generation in our country’s history – I have certainly grown up to see the world differently. Our generational differences account for only some of the variations in our political perspectives, yet our friendship supersedes not only our age gap but our different political ideologies.

Senator Dole turned 95 on July 22. As we celebrate his birthday, I am reminded of so many of the transformative life lessons he has taught me, like while expressing gratitude isn’t always easy, it is truly an underestimated virtue in our world today. Our friendship also underscored for me the value of perspective-taking and of respecting and holding in high-esteem those with whom I might vehemently disagree on particular policy issues.

I’ll be forever grateful that I was given the opportunity to travel with Senator Dole on his “thank you” tour and for the friendship that we developed. For me, the tour offered a chance to get to know a remarkable individual who has made a difference in countless people’s lives. But Senator Dole also took the time to get to know and to develop a friendship with me. He didn’t have to, he chose to –  which I think says a tremendous amount about his character and the value that he sees in every single human life. And while we might see the world differently, we see each other –  as fellow Kansans, as fellow Americans, and just as two people trying to do right in this crazy world.

The truth is, we all have the opportunity to develop friendships with people who see the world differently – people from different political ideologies, different generations, different races and ethnicities, different sexual orientations, and those that are differently-abled. We just have to seize the opportunity and not be afraid of those differences. To live in a country where that is even possible is something for which we can all be grateful.

My birthday gift to my friend, Senator Dole, is to pledge to live his example every day, to never be afraid to form relationships with people who hold different political beliefs, and to seek out those relationships in a way that is authentic and leads to greater mutual understanding. Our country would be better served if more elected officials –  and each of us –  did the same. Our democracy and our country depends on it.