Lots of attention is going today to physical habitat under siege (and for good reason):  without more attention, many of these beautiful areas might go away, or be irreparably damaged. For that reason, many believe that energy invested in this protection and preservation is well spent.

Far less attention, however, goes to the way our civic ecosystem remains under increasing siege. What began as occasional concern for the hostility in the U.S. media and elected leaders, has become widespread trepidation regarding public animosities deepening in every direction, on nearly every issue.

Some believe that without more attention, this precious civic ecosystem could go away or likewise become irreparably damaged, thus prompting similar calls for additional investment to protect and preserve this fragile democratic habitat.

A case study in Utah. Starting in 2014, I had the opportunity to work for Living Room Conversations in a Utah experiment to help cultivate the civic ecosystem there. Rather than plowing up the roots already in place (or riding into town with the “newfangled solutions”), it felt important to build upon and leverage whatever rich habitat already existed.

Thus we began with a local reconnaissance reaching out to 20 different civics organizations to find out what had already been done (it turns out, a lot, as you can see here in a general summary and here in a more recent success in LGBT-religious conservative dialogue). After meeting with a number of leaders in the past work, including John Kesler (Salt Lake Civil Network), Michele Straube (Environmental Dispute Resolution, U of U) and David Derezotes (Peace & Conflict Studies, U of U), I was struck at how underrecognized and little known their efforts were, compared to much louder initiatives that captured the public eye.

Given the lack of recognition and continuing suspicion this kind of bridge-building elicited from many, we have experimented with different ways to connect more people to the possibility of vibrant and productive “disagreement practice,” as defined in the AllSides Dictionary.

Small is big.  Perhaps the most obvious way to do so is meeting people where they are - in their own homes and communities. From my own early experiences, I quickly became mesmerized by the almost magical power of small group gatherings to bring people together across divides (see Eating Hummus With the ‘Enemy’: From Aversion to Affection).

We subsequently experimented with different ways to introduce people in Utah to this Living Room Conversation practice, from a local press release with offers of free consultation, to highlights of a filmed conversation, to even going door to door with invitations in my own neighborhood. Our conversations ranged from gun rights and evolution, to women’s rights and same-sex marriage/religious freedom. Everyone who participated came away feeling uplifted and encouraged.  Out of all these efforts, two additional lessons became clear: (1) The pervasive busyness of American culture remained the largest barrier to involvement: why should I take away time from other things to do this?  (2) As simple as these conversations seem, they elicit some visceral fears in some people of political confrontation or dangerous exposures. That explains another parallel dialogue “gateway” that we attempted.

Easing concerns with a PARTY!  Alongside direct invitations to try it in your own home, we also organized larger community events where people could come have some food, laugh and watch a high-quality conversation take place on stage. This was possible due to the critical support of our key partner, Utah Humanities, in two different “seasons” of dialogue events. As you can see in the highlights from our inaugural Village Square event, we intentionally aimed to make the atmosphere light and social. 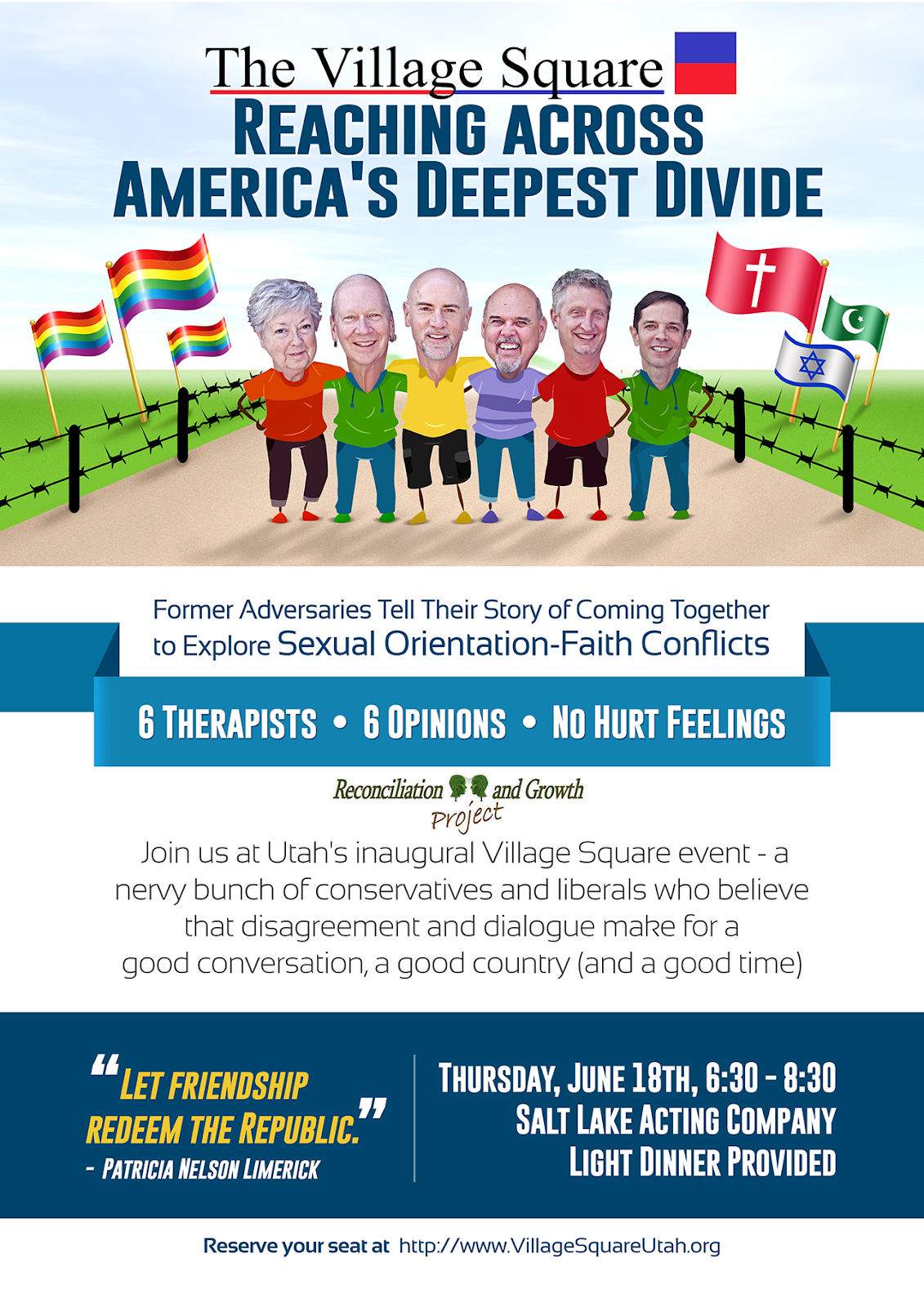 After repeating this approach in a dialogue on the secular/religious divide in Utah, we got feedback that people wanted more of a chance to explore the issue on their own, rather than just listen to a panel explore it.  So in each event since - immigration, policing, climate change, racial bias - we have done a hybrid Village Square / Living Room Conversation model, where we begin with small table conversations over a meal before turning to a panel and then ending with small debriefing conversations. 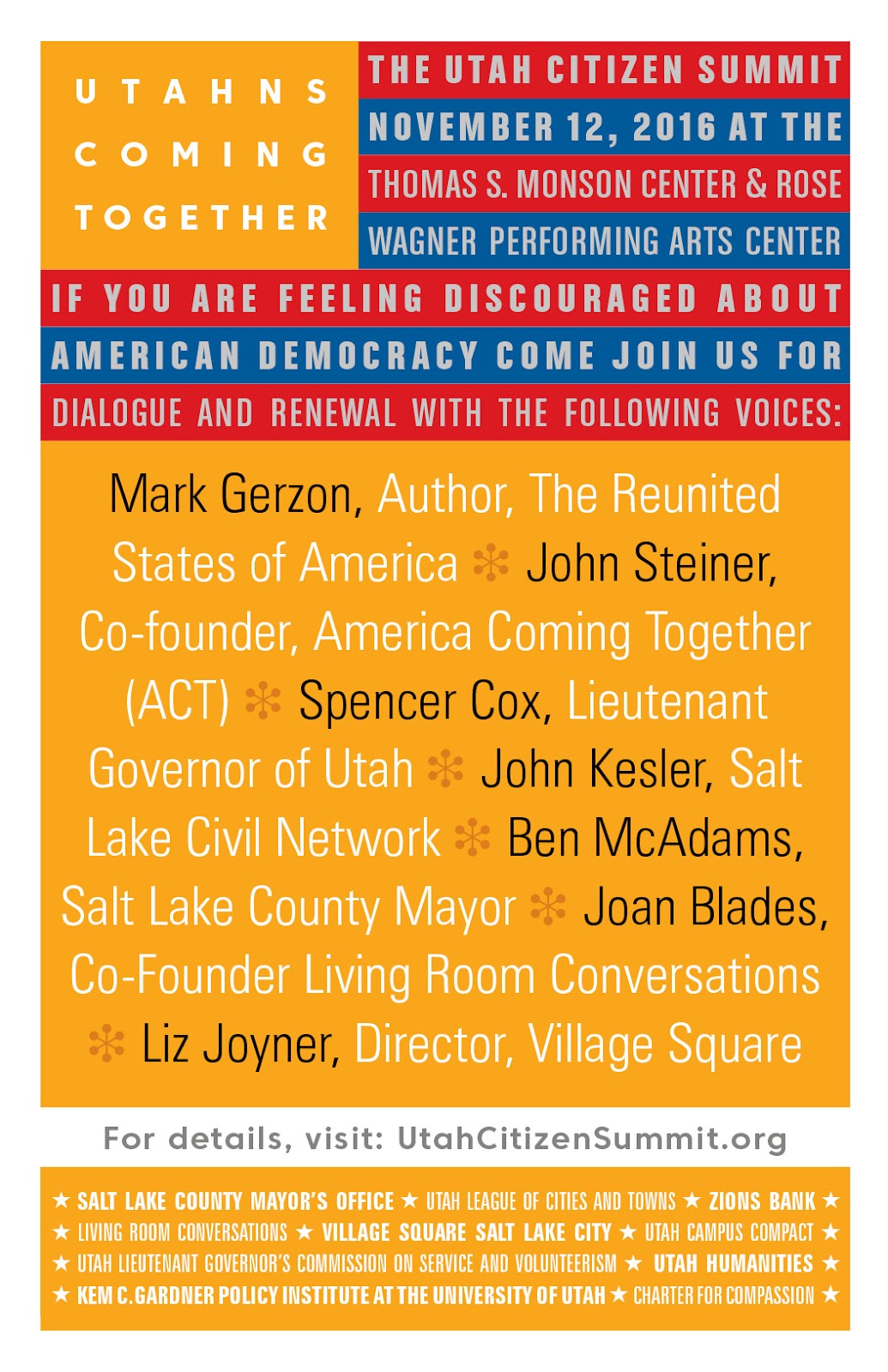 The success of these efforts over time led to a larger, day-long gathering, that we called the Utah Citizen Summit. Sponsored by nearly 15 prominent Utah organizations, this event brought together local citizens and national speakers to first, learn how and practice dialogue, and then celebrate positive steps being taken.  That event expanded our network to include the Salt Lake Public Library system, The Deseret News (the largest newspaper in the state), Salt Lake County Mayor Ben McAdams’ office, the Governor’s Office of Civic & Character Education, the NAACP, and the conservative Sutherland Institute.

Equipping citizen leaders.  Even with all this, however, we noticed most people were hesitant and not confident in their own capacity to make any difference. Thanks to a grant from the Bridge Alliance, we’ve started an ongoing series of training for citizens who want to grow in their capacity to lead conversations, using the Essential Partners “Power of Dialogue” trainings as a vehicle.

Each participant comes away from these trainings with a new awareness of the many approaches they might use in their own community.

Building a practice network.  One single event or training is not enough, though. As with most any craft, real time and work is needed to hone and develop the practice.For that reason, we have been deliberate about developing a network of dialogue practitioners throughout the state. This includes in-person and zoom meetings, as well as ongoing coordination in how to support each other’s work.

Like those who gather who practice meditation and gather with others for ongoing support and training, we aim to be a community of like-minded folks who support each other in “honing the craft.” Part of this “practice network” approach is helping each other make space and time for the practice, much like a meditation network encourages each other to “keep practicing.”

Why do we make time for this?

Because it’s worth prioritizing.  Rather than waiting for national leaders to figure out how to talk across differences, our network of Utah citizens are committed to do whatever we can cultivate and preserve the civic ecosystem in our own communities. Once again, instead of advocating one technique, one organization or one practice as holding the singular capacity to “save” us from our current political atrophy, our overriding focus is on the complex and multiform civic ecosystem needed in order for communities to thrive. Just as, in nature, no single species in an ecosystem can thrive without a degree of interdependence on other forms of life, so too must efforts toward constructive dialogue draw strength from a web of other existing efforts. In this way, we envision Utah becoming a national model of what it takes to fight to protect a robust ecosystem for civic engagement, and in this way, strengthen our democracy.