Senate Republicans might not share Biden’s vision for expanding health care coverage, but there is broad bipartisan agreement on the need to lower health care costs. Last year, we showed how recent proposals could save the federal government half a trillion dollars while lowering premiums, out-of-pocket spending, and other costs for households, businesses, and state governments by an additional $400 billion. Many of these proposals, including those that would reduce and reform Medicare provider payments and lower prescription drug costs, currently have broad bipartisan support or have appeared in both President Donald Trump’s and former President Barack Obama’s budget proposals. Recently, there has also been strong bipartisan interest in restricting or ending surprise billing. 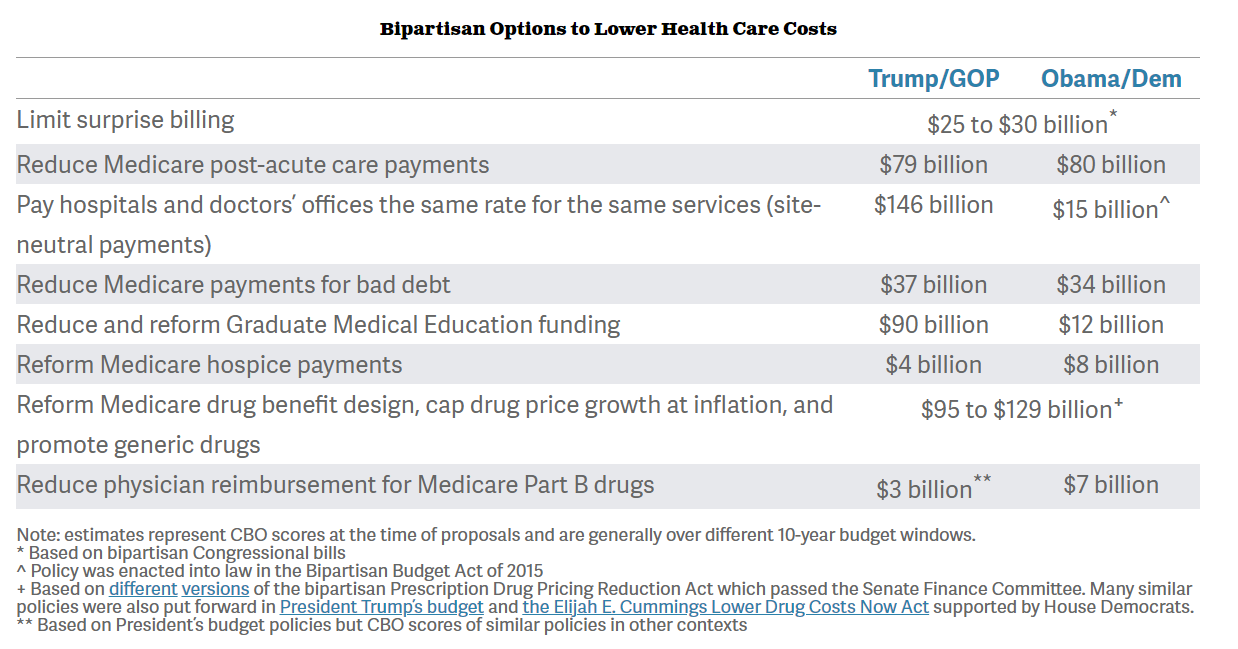 In addition to these bipartisan measures, our Budget Offsets Bank includes dozens of proposals to lower health costs, while our Health Savers Initiative – a partnership with West Health Policy Center and Arnold Ventures – is working to develop new, more innovative proposals.

During the campaign, President-Elect Biden proposed upwards of $4.3 trillion of tax increases while President Trump supported at least $1.7 trillion of tax cuts. Republicans and Democrats do not need to agree on the appropriate level of taxation to agree that households and businesses should pay any taxes owed.

From 2011 through 2013, the tax gap averaged $441 billion per year, meaning 16 percent of taxes owed were never paid. Closing loopholes and increasing funding for tax enforcement could help close the tax gap. CBO estimates that increasing the budget for Internal Revenue Service (IRS) tax enforcement by $40 billion over the coming decade will yield more than $100 billion of additional revenue. Similar proposals in both President Trump’s and President Obama’s budgets would have yielded anywhere from $39 to $56 billion of net deficit reduction. Additional measures to clarify tax laws, increase withholding and information reporting, and strengthen IRS authority could potentially reduce the tax gap by billions more.

Beyond improving tax collection and enforcement, there has been bipartisan support in the past for closing various loopholes that encourage tax avoidance. Perhaps policymakers could once again unite around proposals to close those old loopholes, as well as new ones that were inadvertently created under the Tax Cuts and Jobs Act (TCJA) of 2017.

Though passing a bipartisan budget resolution is often a challenge under divided government, there is support among members of both parties for fixing our increasingly dysfunctional budget process. One place to start would be the Enzi-Whitehouse Bipartisan Congressional Budget Reform Act (BCoBRA), which passed the Senate Budget Committee with a 15-6 bipartisan vote. The bill would incorporate debt-to-GDP targets into the budget resolution and the budget process, adopt biennial budgeting while keeping annual appropriations, link debt limit increases and discretionary spending caps to passage of a budget resolution, and add transparency requirements such as including interest costs in CBO scores.

To end the risk of government shutdowns, policymakers could consider implementing an Automatic Continuing Resolution (auto-CR), versions of which have been put forward by both Republicans and Democrats. They could also consider changes to the debt limit that would create a better enforcement mechanism to control debt without inherently threatening the risk of default, or pair debt limit reforms with enforceable budget goals. The Unity Task Force recommendations discuss scoring issues and push for a “commission to study shortcomings in the budget process and provide detailed recommendations.” Even if lawmakers have difficulty finding common ground on concrete policies, they should work to improve the functionality of the budget process. 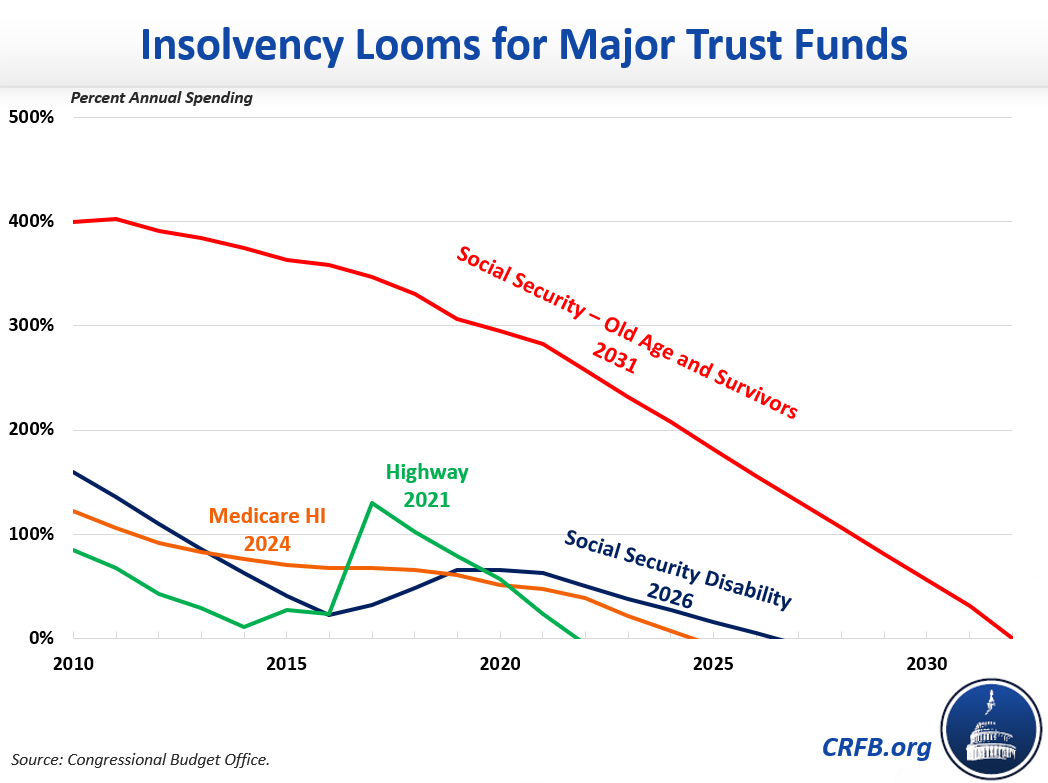 Lawmakers will need to work together to save these trust funds sooner rather than later. The longer action is delayed, the more costly and painful the necessary adjustments will be. A possible interim step would be to support something like the bipartisan, bicameral TRUST Act, which currently has 15 Senate cosponsors, 18 House cosponsors, additional support through a mention in a bipartisan House letter with 30 members of each party and the Problem Solvers Caucus, and growing support among budget experts. The TRUST Act would establish bipartisan “Rescue Committees” for each endangered trust fund. The committees would report recommendations to improve solvency if they get majority support and at least two members from each party to ensure bipartisanship. The approved recommendations would then receive expedited consideration in Congress.

Democrats and Republicans are going to have many disagreements in the coming year. But where they do agree, they should work together to support the economy, end the pandemic, reduce health care costs, improve tax compliance, fix the budget process, and take steps toward preventing insolvency of major trust funds. With debt already as large as the economy, inaction should not be an option.

1 Control of the Senate will depend on the result of two run-off elections in Georgia, scheduled for January 5, 2021. Both seats are currently held by Republicans. If Democrats can pick up those two seats, the Senate would be split 50-50 between Republicans and Democrats. Since the Vice President is responsible for casting tie-breaking votes as President of the Senate, this would give Democrats effective control over the Senate as well.