As the smoke clears from the presidential election, more Americans may see more clearly highly consequential outcomes down ballot, including the first-ever “Final-Four” voting system (non-partisan primaries with ranked choice voting general elections) in Alaska and an end to partisan gerrymandering in Virginia, among others.

Periods of deep division and dysfunction can fuel periods of reform and renewal, galvanized by citizens who demand more from their political system. The pace of reform may at first seem slow-plodding, but momentum builds into eras of breakthrough progress.

The story of America’s “Progressive Era” at the turn of the 20th Century reminds us how immense, enfranchising change was accomplished in a relatively short period of time.

At the end of the Gilded Age, a clash between class, race, and gender, combined with rapid industrialization and increased party power (and subsequent political corruption), gave rise to a cultural environment ripe for reform.

Their efforts socialized change and ushered through reforms like women’s suffrage, nominating primaries, the direct elections of senators, regulation on corporate campaign spending, the secret ballot, election recalls, and the people’s initiative and referendum. These are just some of the major reforms to democratic processes achieved between 1890 and 1920, led by both states and Congress. 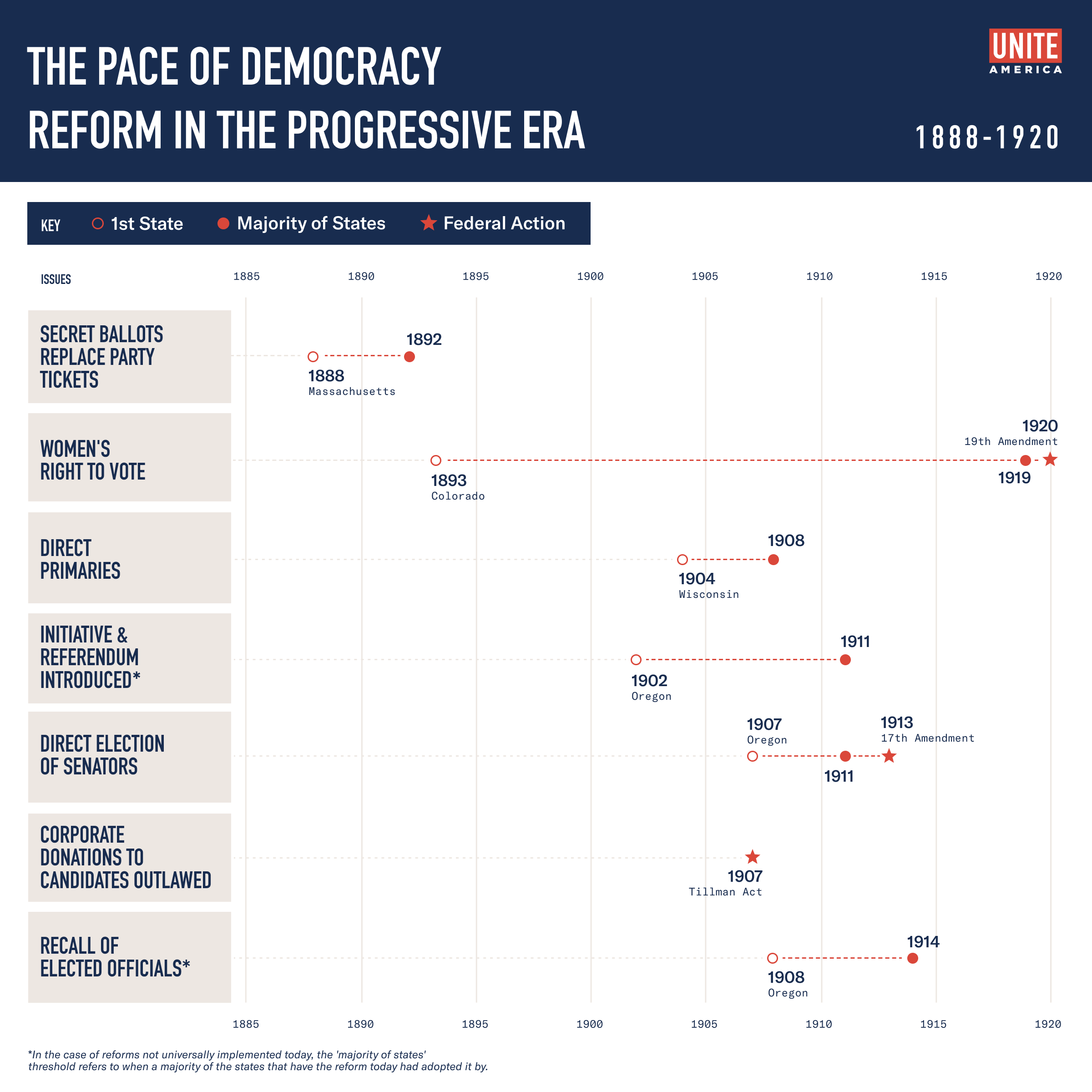 For example, take the direct election of U.S. Senators: as originally adopted, the Constitution allowed state legislators to elect two senators to six-year terms. In the late 19th Century, states frequently deadlocked over the election of a senator, especially if different parties controlled each chamber. Senate vacancies lasted months (or years). In subsequent years, intimidation, bribery, and political corruption continued to muddy the process and mount public pressure for reform. In 1901, Oregon became the first state to adopt a near direct election of a U.S. Senator based on voter preference. Shortly after, over half of states followed suit. In May of 1912, and later ratified in April of 1913, the 17th Amendment galvanized a movement to put voters first.

A similar pattern is clear in the case of women’s suffrage. At the beginning of the 70-plus year movement, the franchise was initially expanded at the local and state level, as all of the states fully enfranchising women in the 19th century were west of the Mississippi. Women’s contributions to war efforts during World War I further cemented momentum for enfranchisement, particularly at the federal level. The 19th Amendment passed the House and Senate in the Spring of 1919; though states were slow to ratify the new law, three fourths had done so by August 1920.

The Progressive Era also gave rise to state-by-state adoption of the people’s initiative and referendum, and recall elections. Many new-to-the-union states went so far as to write processes for initiatives, referenda, and recalls into their state constitutions. South Dakota was the first state to adopt voter initiatives in 1898, followed by 22 other states during this time. In 1908, Oregon became the first state to adopt recall elections to remove elected leaders from office. Soon after, 12 other states adopted similar laws.

Also during the Progressive Era, all but four states adopted direct nominating primaries, beginning with Wisconsin in 1904. The change empowered voters with a say in nominating their leaders, rather than party bosses in smoke-filled rooms.

States weren’t the only actors paving the path for reform — Congress had the ability to lead on reform (just as they do today). Conservatives and Progressives alike began to demand regulation to limit the influence of wealthy banks and corporations in elections, following monstrous campaign spending:

William McKinley received $16 million (the equivalent of about $490M today) in contributions for his 1896 campaign, $6 million of which was raised from corporations with the promise of “big-business-friendly” policy. Similarly, prior to his 1904 election, Theodore Roosevelt successfully raised over $2 million in campaign contributions from corporations. Shortly after his election, Roosevelt called for legislation to ban corporate contributions to future candidates. In 1907, Congress passed the Tillman Act, which prohibited contributions from corporations and national banks to candidates for federal office, though it lacked spending limits or any type of disclosure requirements. Nevertheless, this was the first federal effort to regulate campaign spending.

Today’s environment, similar to the Progressive Era, is also ripe for reform: dysfunctional government and hyper-polarized institutions create a similar demand to reimagine democracy. The current pandemic, and subsequent social and economic uncertainty, further exacerbate inequities and injustices that have long persisted.

History demonstrates change is often incremental until it’s not; sweeping reform comes about when enough voters demand change and enough victories build to a tipping point. The good news is that powerful, common sense, nonpartisan solutions exist –– from redistricting reform to ranked choice voting. And these reforms have already been enacted by voters in many states –– from Alaska to Virginia.

The Progressive Era reminds us that reforming our political system to put voters first it’s not a radical idea — it’s actually a 130 plus-year-old-idea.

History is set to repeat. Reform can be America’s next chapter.