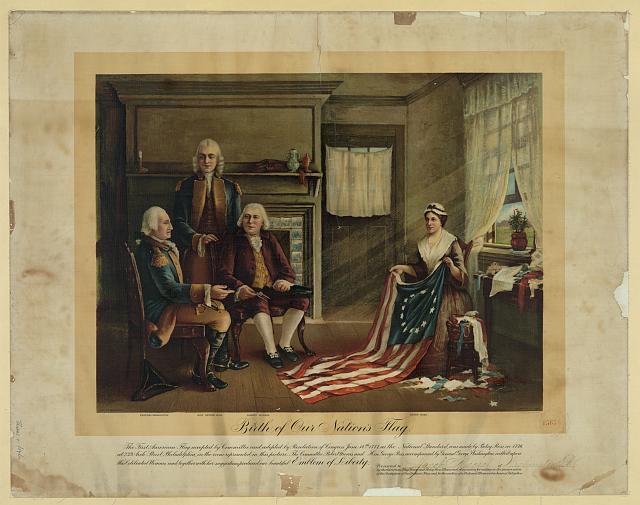 Betsy Ross certainly created a flag, and her design may have influenced what ultimately became the flag approved by the Continental Congress. Her story served a purpose, to inspire patriotism and a can-do attitude in younger generations, especially as a female role model. But historians have found that it is far more likely that the flag was designed by committee, or at least through an iterative process of addition and subtraction of various flag features.

There were at least 17 flagmakers in Philadelphia in 1777, possibly sewing many different variations on a national flag, incorporating some of the same elements as each other. Even in the apocryphal Betsy Ross story, in which she was approached by George Washington to manufacture the flag, that flag had been designed by a committee and Ross merely added her own alterations. Further, Ross may have been aided by others or not involved in the final flag production at all.

As historian Marla Miller, an expert on Betsy Ross and the flag, writes, "Many people helped form the national emblem we recognize today...The flag, like the Revolution it represents, was the work of many hands."

The true story of the flag’s origins provides a valuable lens for the work we need to do to heal America in our divided age. It’s not about crafting the most glamorous or simplistic story — real patriotism comes from collaborative, iterative, process-oriented work, and from giving credit widely, acknowledging the contributions of many rather than one. It’s about putting our heads together to innovate, sharing design ideas, taking a piece from one and a piece from another, and doing the laborious stitching together of everything Americans hold dear, in order to create a stronger national fabric instead of one ripping at the seams at the first sign of divisiveness.

This Flag Day, we can look to our Stars and Stripes for a symbol of teamwork and collaboration. Just as the flag is woven together with many threads, we can aim to surface better ideas, find common ground, and keep focused on the process of improvement by incorporating many voices -- and remembering the many hands it takes to make this fabric strong.