Cynicism and Hope -- Our Work in the Revitalization Movement

Early this year, NBC News published a survey about Millennials and their thoughts on the future of our nation. The results of the survey were striking -- a clear majority (63%) of Millennials thought the country was on the wrong track, but the same number (63%) felt like they could make a difference by getting involved in politics. An even larger majority (75%) felt that community groups could make a real difference. In other words, Millennials were simultaneously pessimistic about the future of the country and optimistic about the potential for change.

As a Millennial myself, these borderline contradictory beliefs mirror mine quite well. I see a nation ruthlessly divided into overtly hostile political factions; two parties that seem content to weaken our democratic institutions in the name of partisan policy wins; and precious few (any?) national leaders who seem genuinely interested in bringing the country together. I also don’t think keeping Party X in power or voting in overwhelming numbers to take back power for Party Y will solve anything -- as I said in my post Country Before Party, I don’t think forcing one group’s vision for the nation onto the nation as a whole is a sustainable, or intelligent, strategy.

So, why am I optimistic? Honestly, I think some of it comes from necessity. I am an American and my wife is an American. Our families live in America and nobody has any plans to leave the country. Therefore, if we want to raise a family with a strong support structure behind us, we’re going to do it in America (to be clear, I feel very fortunate to live here). That means that I can either assume that I will be raising my future child in a nation on the decline, or I can believe that we can turn things around and leave my child with a country that is set up for success. That’s every parent’s hope, right?

The main source of optimism, though, is the work of the Bridge Alliance’s members. Across all 50 states, Bridge Alliance members are slowly, but steadily, achieving victories for the nation. I joined the Bridge Alliance because David Nevins discussed a philosophy that made sense to me -- there is no silver bullet for fixing the nation, but if we can work on the myriad of problems afflicting our nation from a bunch of different angles, we might just have a chance. That is exactly what I see occuring. Whether it’s FairVote supporting a  Maine initiative for Ranked Choice Voting or 130 different organizations coming together to host conversations during the National Week of Conversation, patriotic leaders who believe in “Country Before Party” are making headway beneath the partisan wars that dominate the news cycle.

That said, I don’t believe that the Bridge Alliance and its members are guaranteed or even likely to achieve the goal of a healthy democracy. The United States is a massive, complex system of institutions and actors -- it would be a monumental lift for a highly-funded, meticulously-coordinated reform effort. The revitalization movement is not that, nor will it likely ever be. Nobody gets rich promoting democracy revitalization, and meticulous coordination? Forget about it (importantly, the Bridge Alliance doesn’t strive to coordinate its members...we are interested in supporting our members in executing their strategies and collaborating for better results). Furthermore, and in addition to the limited resources and coordination, the leaders of the movement will surely make mistakes along the way and the organizations will experience setbacks. Finally, if the movement does make serious inroads, you can bet that powerful people and institutions will be ready to undermine and dilute the efforts (as I have already seen happen).

Nevertheless, the successes the movement has experienced are real and significant, and from where I sit it looks like the movement is gaining momentum. Many of our organizations are growing and are now regularly mentioned by major media outlets (from across the political spectrum). This indicates to me that we have a shot. Let me repeat that -- I think we have a shot. That may sound pessimistic, but I look at it differently. Considering all of the factors working against us and the complexity and power of the institutions we are trying to fix, all I can ask for is a shot.

And I think my mindset is similar to that of many other Millenials -- and that it’s a healthy mindset. Without that strong sense of pessimism about the direction of our country, we would be tempted to let events play out as they will, believing that things will turn out OK in the end whether we get involved or not. However, without the counterbalancing optimism that we can control our fate, we would feel powerless -- that no matter what we do, we are doomed. I joined the Bridge Alliance because I don’t feel powerless. I feel like I have a chance to contribute to a much larger effort to right the ship, in part by supporting those organizations that ¾ of my fellow Millennials believe can make a real difference. It may or may not work, but it’s worth a shot. 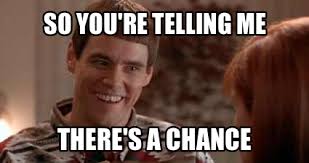