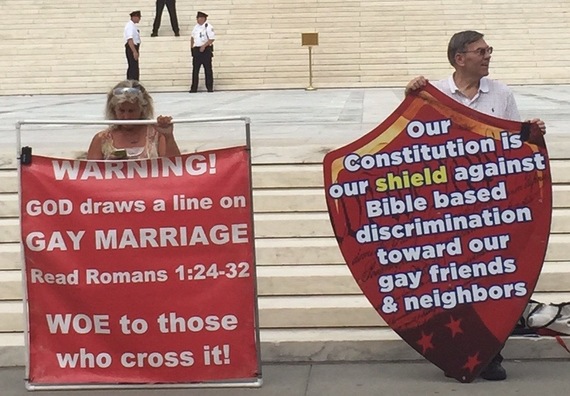 This wouldn't be the first time this particular cultural divide has been so dramatically evident. When Proposition 8 passed in 2008, conservative religious folks said things like: "Thank you God, for smiling down on America." In the same moment, secular and liberal-leaning Americans said things like: "I can not express enough how disappointed I am in the people of California. Shame on you!"

Several years later, when President Obama announced his support for gay marriage and the Supreme Court struck down a part of the Defense of Marriage Act, the celebration was flipped on its head - with conservatives now saying things like, "as Americans reject God's ways, consequences are coming." And liberal-leaning America saying: "Tears of joy streaming down my face...I am so proud of this country!" and"It's history in the making...I feel Harvey Milk smiling down on the scene from heaven."

So is Harvey Milk smiling down or God...or both? (or neither?)

What a divide! Unfortunately this profound cultural division has too often been approached more by sound-bites, stereotypes and slurs than by exchange that is substantive and rich. It's all too easy to go along with an overly-dramatic (underly-honest) conversation, which typically confirms our own biases and leaves us ever more certain that we know what the "other side" thinks. If that's true, of course, why would you ever want to talk to "those people"?

In a culture increasingly hesitant about about many cultural divides, organizations like Living Room Conversations and the National Coalition of Dialogue & Deliberationcontinue to explore creative ways to help diminish people's worries and resistance just enough to get them in the same room, where other magical things just might happen - like actually hearing each other out?!

This last week in Utah, we completed the first stage in an experiment to help normal Americans explore more generous conversation in their own lives. On June 18th at a local venue, 100 Utah residents gathered for an event sponsored by Living Room Conversations and hosted by the Village Square - one of our national partners. After socializing at a light dinner together, participants gathered in a large hall where they "eavesdropped" on a dialogue between long-time colleagues and friends spanning the gay-religious conservative divide. Rather than a "liberal" or "conservative" event, this kind of dialogue was emphasized as very much an "American" thing - quoting directly from George Washington's own book, "Rules of Civility and Decent Behavior."

The audience asked questions throughout, alongside answering several polling queries from an interactive mobile-based system. When the audience was asked, "If you were Supreme Court Justice of the day, how would you vote on the legalization of gay marriage in the country?" results showed 66% voting "in favor of legalizing gay marriage," 28% voting "in favor of retaining traditional marriage law" and 6% abstaining.

After experiencing generous conversation in sociable atmosphere, will people be more willing to try it out in their own communities? We want to find out!

This is no intellectual curiosity. We believe the quality of public conversation has consequences, for better or worse. Unchecked, a growing number of Americans believe our current socio-political "climate" may prove disastrous down the road. As Phil Neisser, at State University of New York, has argued - Americans seem to be "losing their capacity to disagree in healthy ways." Our own research confirms a profound bafflement among many Americans as to how anyone could possibly disagree with ME about [fill in the blank]!

Honestly, I never say that anymore. By sitting down with my own political opposites on numerous occasions, not only has my understanding of others' experiences grown - my appreciation and affection for these newfound friends has virtually evaporated my own fear and anger. Rather than "those liberals," it is Phil, and Arthur, Nicole, Elaine, Wendy, Dave and Joan - who have taught me so much.

As a result of knowing (and loving) these life-long friends, it's no longer hard to see how someone could disagree with me. For anyone who experiences this work for himself/herself, it's simply impossible not to appreciate the nuance inherent in our richly diverse world.

If it's time for a socio-political detox in your own life, maybe it's time to sit down with your political opposite? No matter what the Supreme Court decides this week on gay marriage, and no matter what your mother-in-law (or brother or neighbor thinks about it), remember that it doesn't have to get ugly! It might even become a beautiful excuse to discover for yourself that thoughtful, good-hearted people can and do disagree vociferously about virtually everything in the world!

Jacob Hess is a partner with Living Room Conversations and the director of Village Square, Salt Lake City. With Phil Neisser, Jacob co-authored the book, You're Not as Crazy as I Thought, But You're Still Wrong, featured on This American Life.