Building Momentum at the Midterms

Projections show that more than $5 billion will be spent on the 2018 elections, a record amount that breaks down to $15 for every American or $60 for every voter in the 2014 midterm elections. All that money reflects the high stakes as Republicans and Democrats battle for control of Congress. While just more than a third of eligible voters showed up at the polls in 2014—the lowest in a midterm since World War II—election watchers expect voter turnout to be higher this time around.

Big donors continue to hold sway even though most Americans agree that political campaign spending should be limited. The big bucks are coming in for both major political parties: Former New York City Mayor Michael Bloomberg has donated $110 million to Democrats, while Republicans have received $113 million from megadonors Sheldon and Miriam Adelson.

And then there’s the dark money that circulates in and around our political system (both legally and illegally). According to a detailed U.S. federal court filing in Virginia last week, the Russian Operation Lakhta—one component of Russia’s recent information warfare in the U.S.—reached a budget of $1 million a month earlier this year.

While the grip of big money on our political system certainly feels tight, we are also seeing huge momentum around solutions to this systemic problem. Journalists and storytellers are focusing efforts on uncovering the role of big money in our system. The topic is the subject of “Dark Money,” a recent documentary that examines the influence of untraceable corporate money on U.S. elections and elected officials. Another upcoming film, “People vs Politicians,” shares the stories of grassroots reformers who are putting solutions to work at the state level to reclaim democracy.

We’re certainly not alone in these efforts. Across the nation, states and cities are demanding representation and an end to the outsize influence of big money. It’s happening in the Dakotas, Maryland, Missouri, Colorado, New Mexico and Massachusetts—and this is just the start. We have support in Congress and the Senate, too. Reform supporters include high-profile Democrats such as Senator Elizabeth Warren and Florida candidate Andrew Gillum and Republicans such as Representative John Katko and Governor Charlie Baker. American Promise has signed on to a historic cross-partisan coalition dedicated to “come together to press for top to bottom, systemic political reforms to return power in our government to the public.” 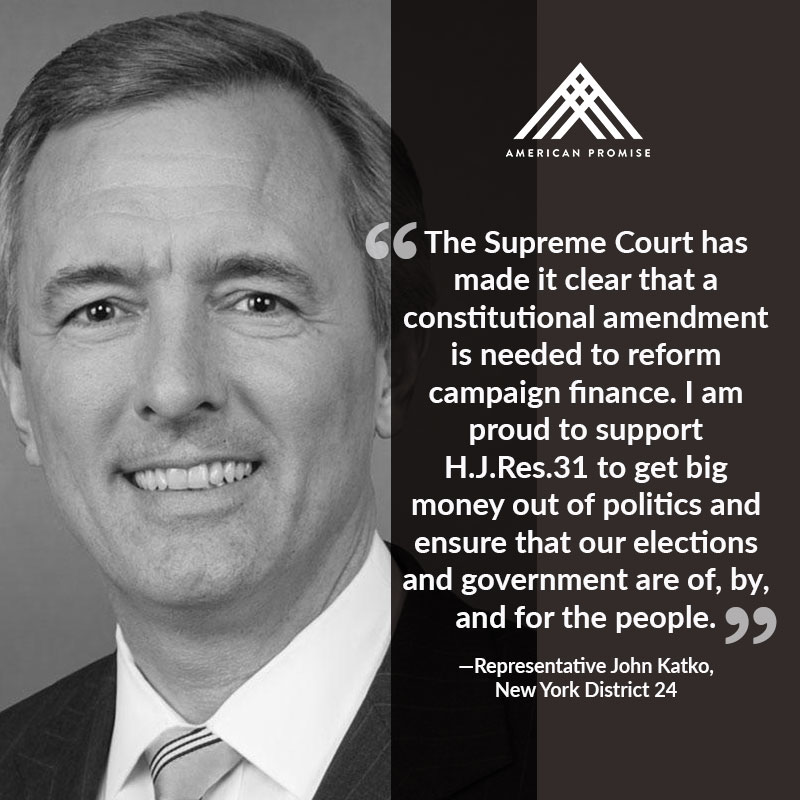 Republican Representative John Katko supports an amendment giving Congress the power to "set reasonable limits on the raising and spending of money by candidates and others to influence elections." The total count of current congresspeople supporting this or similar amendments is 195.

What these leaders and citizens across the nation know is that we need the 28th Amendment to create a more equitable political system that gives power to people rather than special interests. Removing big money from the political system will ensure that each American’s vote counts equally.

At American Promise, we’re fired up for action in 2019. And we aren’t in this alone. We’re part of the recently formed Declaration for American Democracy coalition that will start work Wednesday—the day after the midterm election—to promote reforms in voting rights, ethics and money in politics.

We the People are gaining momentum in our work to create a true democracy and get big money out of politics. The task before us is big, and we face powerful opposition. It will take all of us working together. To help us succeed, consider pledging to join an American Promise Association near you or donating to American Promise in support of our work.

And be sure to use your power and VOTE in this midterm election!