A Place to Go and a Place to Stand: Can Democracy Save Itself?

(Note: This is an original article by Evelyn Messinger of Digital Citizen)

The Internet has undeniably expanded the voices of individuals and groups in our political discourse. And yet, the role of the citizen seems to be diminishing even as the power of the individual grows. Like many of you reading this post, I thought the Internet would foster a powerful and engaged citizens’ consensus that could moderate toxic political discourse. It has done the opposite, by helping to create today’s stark political divide. And although we are at a crossroads between danger and opportunity, I believe there is reason to expect that the Internet will still get us to a more perfect democracy.

This is an exciting moment. Scores of new organizations are emerging that support civility and resist poison partisanship. One activist calls this new effort “the Healthy Democracy Movement.” It pinpoints two specific areas that can be addressed to bring public participation in civil dialogue to the next level, and perhaps to the scale necessary to help solve today’s crisis of citizenship.

A Place to Stand

Remember 2011? It was a strange year because the Tea Party, which formed shortly after Barack Obama’s election, was growing into a force on the right, even as the Occupy Wall Street movement was blossoming on the left.

At that time Digital Citizen, our organization, which was immersed in addressing partisan divisions, noticed something: local news outlets around the U.S. were reporting that delegations of Tea Partiers were visiting Occupy rallies, and vice versa. For example, there was this Yahoo News headline: “Occupy Memphis, tea party members meet.” The Worchester, MA. Telegram & Gazette covered “Tea Party, Occupy groups find common ground in Worcester.” And the Baton Rouge, LA. Business Report said that in their city,  “Tea Party and Occupy reps find common ground.” We made a Pinterest page to keep track of the phenomenon.

But when the election machines began to gear up in earnest in early 2012, these meeting virtually disappeared. The onslaught of negativity, the accusations and reminders of what you hate about the other side, the jokes and memes ridiculing “them,” drove people to the comfort of their own side. Comfort is the key word. When your social circle, your political tribe and your favorite media outlets are ceaselessly detailing the evil and wrong-headedness of the other party – well, that’s not the moment you will decide to venture across the divide to meet them.

And so we watched the connections dry up. Here’s what came to me then: political parties have “A PLACE TO STAND” that the Healthy Democracy Movement does not have. Maybe you and your side want to protect refugees, or you and your side want to make sure you have a gun to protect your family. Whatever – when it is time to vote, you are forced to choose your side. And you find comfort there, because you KNOW what your side stands for, and you know you will be accepted by that community of the like-minded.

For most people, there is no deeper story than that. Even practitioners of the Healthy Democracy Movement, like me, have felt the solace of being embraced by “our” side. This feeling of safety is reinforced every time people “like” and share my political posts on social media, and when I see my own political views reflected on the yard signs and bumper stickers of my neighbors.

The Healthy Democracy Movement has guidelines for civility, and this is important because civility is necessary -- but it is not sufficient. The art of compromise, a form of thought that has supported civilization for eons, is a way of thinking that needs to be cultivated. As David Davenport, a fellow at the Hoover Institution, writes about the lost art of compromise in Forbes online, “…compromise seeks the ‘best possible’ solution.  Not a perfect union but, as the preamble to the Constitution states, ‘a more perfect union.’”

What we need are models of ACCORD, memes that make connecting, listening, understanding, and civil discussion admirable – and cool. The Knights of the Round Table? The Paris Accords? It is unsettling how challenging it is to even find even a few modern examples of accord – but it’s not impossible.

Rare points of agreement - such as the recent consensus in Congress to end family separation at the US/Mexican border - are seen as anomalies, and quickly forgotten. There is no mechanism to elevate them into popular consciousness. By unearthing and promoting these models, we can give people who are fed up with partisanship and ready to leave their side a place to stand; a bulwark upon which to lean; a shelter from the partisan storms.

A Place to Go

Digital Citizen has produced over 20 broadcast or online projects since 1998 that have featured citizens in key roles. I mention that to make it clear that we are familiar with how people engage via many different platforms and applications, and to give me some credibility to say this: the Healthy Democracy Movement is still missing the “killer app,” the way to take civil dialogue to scale. And going to scale – allowing millions of people to engage in productive discussions with people different from themselves – is the best way the movement can create lasting change.

The Tea Party/Occupy example shows that, at least to some degree, people are curious about “the other.” What if, when a controversial issue arises, we have “A PLACE TO GO” to speak to each other before the partisan framing machine kicks in? A school shooting, a terrorist attack or a financial crisis may offer moments of opportunity for dialogue. People may be more willing to explore how someone else sees the world, may be more open to seek accord with someone whose views differ. Supporting this kind of spontaneous engagement is, in my opinion, the missing “killer app.”

Our community has never been closer to accomplishing this than it is today. As those reading this post might know, there are currently some 250 organizations involved in the #ListenFirst Coalition, and ~100 organizations acting within the new Bridge Alliance umbrella group, all of which are supporting, using and expanding civil dialogue, striving to “upgrade our democratic republic …[by] engaging citizens in the political process…and promoting respectful, civil discourse.” With so many groups helping people find accord, this movement is surely poised for success.

As encouraging as this is, there is still a serious challenge in the practices and funding structure of the Healthy Democracy Movement that could hinder its development. I am writing to draw attention to this issue, which is an unintended consequence of policies that can, in fact, be changed. So let me lay out the problems.

First, a process of welcoming drop-in visitors and guiding them to productive discussions on topics in the news, does not exist. In fact, the overwhelming majority of dialogues currently take place in the opposite context: they are created when funding is available, or when a pre-scheduled event is taking place. In both cases, the topic must be decided well ahead of time, often months in advance. And worse, participants must be recruited by the organizers, also well in advance. So no one can simply show up and want to listen and talk.

Another downside: people who like engaging in dialogues are often over-represented in a pool of recruited participants. We have seen, and others have told us, that an ongoing series of public discussions in a given locality tends to attract people primarily interested in dialogue, who show up over and over again regardless of the topic. Additionally, Liberals are more interested in speaking to the “other side” as a general principle than Conservatives are. This either skews the participant pool leftward, or forces the recruiter to work very hard to find people who are representative of the whole population. And finally, because participants are assigned a given topic when they are recruited, even if it is not currently in the news, there tend to be more professionals and other overly-interested parties in the mix.

The key here is that, to find full engagement, the people themselves need to decide what they want to discuss, and when they want to connect on that topic. And this is exactly what is still missing from the Healthy Democracy Movement: a place where each of us can go to talk about the issue we want to talk about, when we want to talk about it. It is difficult to do this in person today, since most communities are now so Red or so Blue that the minority side may not feel empowered to speak candidly. So these conversations will need to be virtual – online (that said, a few valiant libraries are becoming physical places where democracy is finding a place to sit down).

Ironically, it is the Internet that provides the freedom to leap physical barriers, and is uniquely suited to offering a place to go, even if such places do not yet exist.

There are websites that do parts of this already, and could one day become the place to go to connect to “the other.” Living Room Conversations has a brilliant methodology for self-facilitating discussions and uses videoconferencing to connect people who don’t live near each other, although they don’t offer an “app” to self-connect upon demand; the National Conversation Project gives website visitors a choice of topics and then directs them to in-person meet ups at a nearby physical space on that topic.

The closest to creating this app is Mismatch. Focused on schoolroom use at this stage, Mismatch has been piloted in 20 U.S. classrooms, with more than 300 students participating. Mismatch is working on building an app that will match users, and “works like a dating site” in reverse, matching people with their opposites, and “guiding them through carefully structured online video conversations.”

How would this “killer app” work? People would need to know that the place exists, and it must always be open. When news breaks, a sudden influx of visitors to the website or app can be expected: people who are seeking dialogue related to the event. They would state the issue and sign up, at which time they would be automatically walked through a survey about who they are (where do you live, what are your political leanings, etc). Within a day or less, they would be introduced to the others who will be in their dialogue group, given a briefing on the process, supplied with well-vetted facts, and the rules for civil dialogue, and placed into a video chat-room. The chatroom will be framed with ample instructions and safeguards. This was our original design for the Mismatch app: 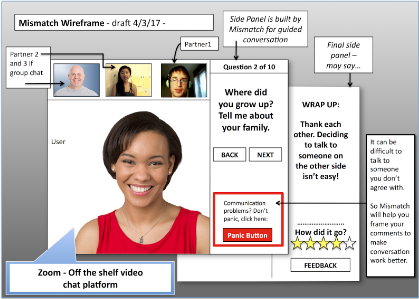 So what is stopping this from happening? The political climate could not be better for expanding civilized dialogue. New types of funders – especially those in the digital media space seeking a way out of the poisonous present – are surely already joining traditional funding institutions. The issues of trolls and vitriol may at first seem an impediment, but many tools now exist to reduce unwanted intrusion in online discourse. And, as I’ve said, there are now (unlike when we first began this work) many great organizations involved, organizations that can put processes like these in place.

Perhaps, then, a solution is for the Bridge Alliance, and a group of its most powerful members, to commit to a shared goal: make the creation of an on-demand, rapid-response dialogue app their joint top priority. A matching app, if created by many organizations, could be used in many ways. So if enough of us tell our funders that yes, the world is ready – and we are ready – they will come.