A Knight on a White Horse? 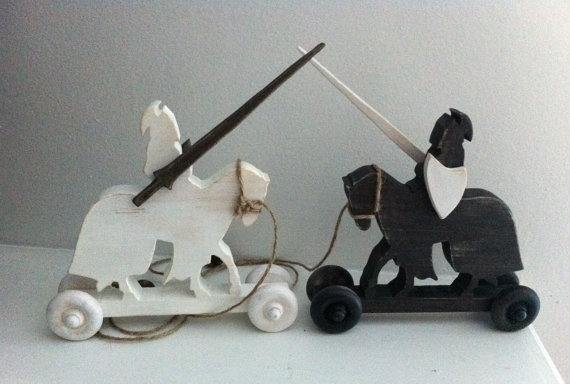 Now that we have entered 2016, we can count on two certainties: a national election and more terrorism. So it is no surprise that every candidate claims that he — or she — is the knight on a white horse who will save us from ISIS. But as every military strategist since Sun Tzu knows, they are missing the crucial element in self-defense. If we don’t address this vital ingredient in a national security strategy, our ruthless, many-headed terrorist enemies will find our country to be easy prey.

All of them now argue passionately that they are The One who will arrive on their white horse and protect the homeland. But none of them are willing to tackle the issue of political hyper-partisanship. They are forgetting the adage: “Divided we fall, united we stand.” With all due respect to the leading candidates, a victory either for Donald Trump or Hillary Clinton (or for another candidate trying to elbow them aside) will not solve this deeper problem. In fact, it is likely to get worse.

We can’t summon enough political will to build a major airport anymore, or even fix our bridges. We can’t negotiate a federal budget without the threat of government shutdowns. We can’t cope with Ukraine without cross-the-aisle name-calling. We can’t pass health care reform without a rebellion on Capitol Hill. If we can’t agree on the basics, how can we fight a global terror threat?

This question has been on my mind ever since September 11. Since then, every foreign policy decision in recent years has quickly descended into partisan sniping. As a nation, we no longer know how to come together in unity — about anything. Virtually every candidate has commented on our broken, dysfunctional political system.

“We have to work together to face this challenge,” said President Obama in his speech to the nation on December 6. But the speech soon became just another log on the fire of division: within hours, it was clear the nation was even more divided than before.

Anyone who follows foreign policy is deeply troubled about how it careens from one strategy to the next because of confusion fueled by partisanship. At an event my colleagues and I organized earlier this year, which was focused on the growing partisan divide, I listened closely to a young woman who was a national security analyst.  “Even though my job is about studying threats from abroad,” I heard her say, “I’m here tonight because we Americans don't seem to able to work together anymore. I am afraid that the biggest threat we face is from within.”

Our response to the recent terrorist attacks is further evidence that this young national security analyst has a point. Terrorists know that, for the next eleven months — and probably even after Election Day — our country will be in a political fistfight with itself. ISIS leaders do not have to be political scientists or experts in American culture to know that it will be hard, if not impossible, for this country’s leadership to take bold, sustained effective action against a foreign enemy. We will be too busy fighting with ourselves.

The point is not to blindly rally around the Commander-in-Chief, or around his Republican detractors. The point is to recognize that some issues, such as national security, are so vitally important that they deserve something better than the typical pre-election partisan squabbling. When an issue is a matter of life and death, who can we raise the level of our political discourse and actually dialogue, deliberate and reach a coherent and sustainable decision? Now that our security depends on it, can we finally put country before party?

The greatest military power on earth obviously has the capability of containing and ultimately eliminating a small, poorly organized caliphate of hoodlums masquerading as devout Muslims. But that is true only if we are united. We have the proven skills and tools for having a national conversation and for reaching common ground. But we need to use them — and soon. We cannot afford eleven months more of dithering.

Of course disagreement is a vital part of being a democracy. But so is decision-making. Let’s have a vigorous debate about how to defeat ISIS. But then let’s unite and accomplish it together.

The knight on the white horse is not Trump or Clinton. It’s a reunited America.

Mark Gerzon, president of Mediators Foundation and co-founder of the Bridge Alliance, is the author of the forthcoming The Reunited States of America: How We Can Bridge the Partisan Divide.