You may have already prepared yourself for any potentially uncomfortable holiday conversations by reading our 5 tips for handling political conversations at Thanksgiving dinner, but what if you could practice beforehand?

Our conversation tips for bridging divides include asking to listen, not to respond, exhibiting genuine curiosity toward another person's views, and noting points of agreement. So we were delighted to find the Angry Uncle Bot, a project by Smart Politics, which allows you to hold a conversation with your political opposite and gives you feedback on your responses — showing you whether they'll be a productive step toward mutual understanding, or only inflame tensions. 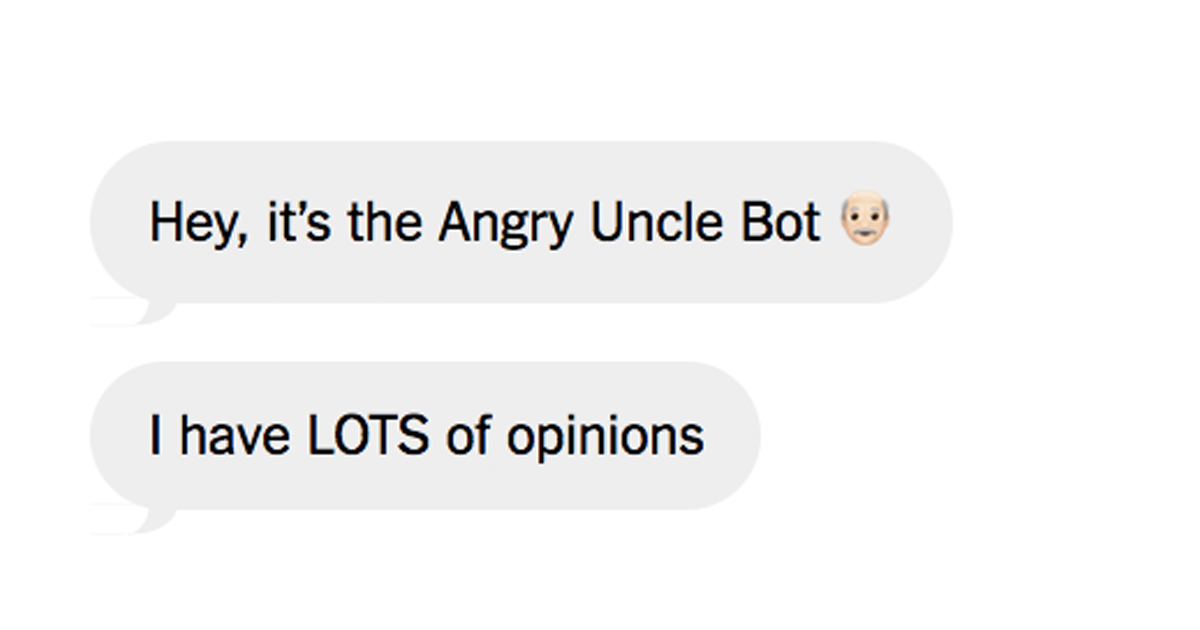 With our country more polarized than ever, many Americans will find themselves face-to-face with people with whom they disagree on Thanksgiving. While many of us have a tendency to stay in our filter bubbles consuming biased news the rest of the year, we're suddenly forced out of our comfort zones. The Angry Uncle Bot is great practice for navigating such a situation.

When I chose to respond with claims such as, "We need to shrink government, not expand it," Angry Uncle came back with, "That’s ridiculous... we need MORE government intervention and a BIGGER safety net."

This reflects my experiences talking with people who hold different political views than me in real life. Statements like these, which focus on broad areas where we disagree (the proper role of government), don't necessarily serve the dialectic. Instead of moving deeper into why we feel the way we do, or trying to better understand and appreciate one another, we're left in terrority where we both feel defensive (wanting to protect things we deeply believe are necessary for human flourishing and survival) and combative (feeling threatened in a very biological way because the other person doesn't agree and might want to take those things away).

The folks at Smart Politics provide immediate feedback on your dialogue with Angry Uncle. For example, they suggest that instead of stating, "We need to shrink government, not expand it," perhaps I could say, "Did I ever tell you about a time when...", as our brains are wired to respond to stories, not logic.

Maybe I could talk about a time when I experienced serious government waste or inefficiency, which led to my views. This might help Angry Uncle to be not so angry, and appreciate my perspective. In turn, I could also ask him open-ended questions about why he thinks the way he does. Open-ended questions foster feelings of empathy while encouraging us to self-reflect.

Julie Mastrine is the Director of Marketing at AllSides. View our unbiased news and media bias ratings.